Smartwatches are often criticised for their fiddly, hard to control interfaces. Now, a lab at Carnegie Mellon University has found a solution – a device that means the wearer's skin can be used as the touchscreen.

The Future Interfaces Group, part of the university, have created 'SkinTrack', which "enabled continuous tracking on the skin".

A ring, worn on the non-watch hand, emits a "high frequency AC signal" that connect to a sensing wristband, much like the strap of a traditional smartwatch, which is fitted with electrodes.
When the ring finger touches the watch-wearing hand, a signal is sent to the watch and allows wearers to navigate their device using their skin. 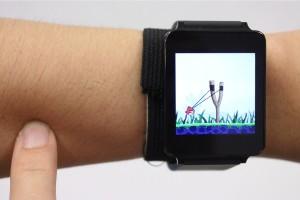 A number of commands are also possible - you can sign documents, for example, and tracing particular letters will bring up particular apps, for example ('E' for email or 'F' for Facebook). Users can also drag apps off of their device and onto their skin, creating "spatial shortcuts", as well as play games, using their finger and arm as controls.

Though the tech is not yet available to buy, the team hope that it could be used in future development of smartwatches because it is "compact, non-invasive, low-cost and low-powered."

Drones could soon be used to deliver emergency organs