Actually, guaranteeing high-quality standards is a great challenge, and Vici wanted a test bench being on top of the situation.

The test bench is required to be an easily adaptable solution able to handle both characterization tests and very articulated life tests on different types of throttle bodies. The testing process is supposed to work better thanks to the placement of different monitoring points on the basis of which data can be filed and validated: as a remarkable feature they have to be settable by users according to position and absorbed electric current.

Fastness, precision and multitasking are fundamental requirements for such a solution: a test bench has to test up to twenty bodies at the same time and to record not only bodies data, but also environmental temperatures and vibrating tables frequency and acceleration.

As regards precision aim, in particular, it is fundamental for a test bench thought to be completely reliable to get millisecond resolution of body handling outlines and minimize as much as possible testing margins of error: this is the reason why it has to use a PID algorithm optimized for throttle bodies, able to consider their mechanical and electrical properties.

In the matter of fastness, instead, it was required to develop real-time data acquisition, since the bench has to learn automatically particular body properties as upper and lower mechanical stop (UMS and LMS), upper and lower electrical stop (UES and LES), limp home, etc., and must do it in the shortest time.

These were the basic points needed to get an appropriate and competitive solution, since it has in facts to deal with a particularly complex area: the test bench indeed is required to use a PID algorithm optimized for throttle bodies and works with analog position sensors and digital position sensors with SENT protocol (Single Edge Nibble Transmission).

T4SM has found out the best solution, balanced between complexity of the matter and fastness and precision needing.

The test bench elaborated by VICI is formed by a PC, through which users can monitor the test process, that has to be connected to four Compact RIOs, each one of them handling data of five throttle bodies at the same time: this high performing work line allows to test up to 20 bodies simultaneously.

After the process just explained, a Compact DAQ handles, through PC, all monitored data coming from all the tested devices, other than from thermocouples, programmable power supplies, an environmental chamber and a vibrating table, succeeding in simultaneously handling a huge amount of data.

With this solution process precision and completeness are ensured, because each Compact RIO mounts:

The following diagram shows the components of the bench, their interconnections and the connections with external devices: 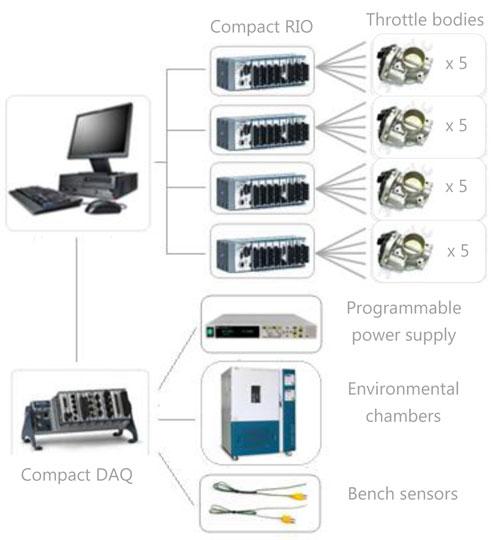 Beside the remarkably performing hardware side developed by VICI, T4SM has worked out an equally careful code optimization to get the best results and to balance work load on all the available CPUs.

In order to allow complete monitoring, the test bench can generate and acquire various types of signals. It has been provided in facts with a system of generation of PWM signals, so that not only throttle bodies but also their engines can be supervised, and with a system for acquiring and calibrating position signals on the basis of voltage values.
As a great innovation, this tool is now able to acquire also SENT signals, because T4SM has, for the first time ever, decodified SENT protocols (usually belonging to the automotive industry) on a compact RIO’s FPGA, so that also digital data can be received and analyzed.

In addition to the completeness in signals acquiring, the administrative side has been developed to make testing process handling easier.

Because of this aim, users are now enabled to manage both movement profiles and movement range of throttle bodies recording profiles and are provided with graphic editors for control points setting, handling cycles development and thermic profiles definition, while apposite PIDs have been developed in order to allow complete control on engine movements.

Users can also define settings regarding data storing channels thanks to the implementation of specific functionalities (for example, all 1KHz recorded signals are saved in TDMS format).

This application has been even more customized by making test sessions start or stop according to users commands or to determinate triggers as environmental chamber temperature or elapsed time values.

It has been completed later by the introduction of functionalities for exporting data and a multilingual interface.

Storage side has been improved through the design of a bit packing protocol to minimize the size of motion profiles transmitted to FPGA limited memory. It enables the system to handle control profiles both when throttle bodies are open, closed and with switched-off engine.

The test bench has been produced in various models and is used in several automotive research centers all around Europe.

We are fully satisfied of T4SM's provided solution. The deep knowledge of LabView and National Instrument’s equipment of T4SM have produced an excellent software with extended capability and an interface that provides to the user an easy and complete access to the data acquired from the bench.